Poets do the Colonnade 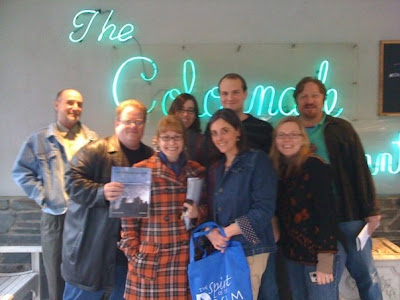 I just returned home from a dinner with great people as well as great poets. In attendance, at what I hope to be the first of many, were Rupert Fike, Collin Kelley, Karen Head, Christine Swint, Julie Bloemeke, Chelsea Rathburn, Cleo Creech, and "little" ole me.

The food was great, but the conversation was even better. I was thrilled to finally meet Christine Swint and Julie Bloemeke. I have only had the pleasure of chatting with them via Facebook. Hopefully, I didn't give them too big of a dose of Dustin-- Christine was across from me during dinner and Julie was to my right. It was great to see Karen, Chelsea, and Rupert as I haven't seem them in a while. Well, Collin and Cleo, I see your mugs each month for the AQLF meetings. (See the two of you tomorrow!)

I would love for each poet from the dinner to post one of your own poems in a comment to this post. Please.
Posted by Dustin Brookshire at 7:37 PM

I swoon, I swoon! It was lovely to be among like souls, and the dose of Dustin was spot on! I will send a poem your way soon....

She’ll go home tonight,
with sore feet and a
pocket full of ones and fives
to her little empty house.
This is the home she shared
with her husband now passed
some seven years, the home
where she raised six children.
She’ll watch TV, smoke a joint
drink her boxed white wine.
then go to bed early, for
Sundays she works lunch --
good money with the church crowd.

Here's a poem I thought would be good to share, since it fits with the theme of Southern Poets.

If Ophelia were from Georgia

It might have happened like this,
that she does a drunken electric slide
down the hill till she reaches
the creek’s edge, wedges a sneaker
into a dogwood’s vee,
hoists herself onto a limb.
Filches buds to weave a garland,
scoots across knotted bark,
cracks off twigs as she seesaws
toward the water.

I swear, that man’s a dog, she hums and tries to pin down
her reflection in eddies
dark from silt and rain.
Who the hell is he to tell me
to straighten up?
And then the branch snaps ¬–
she drops into the creek.

Serene in the whirlpool,
gazing at a hazy sky,
she sings herself to sleep.
White petals snow
on a bed of pine needles
the day they find her body.

this is so new I almost hesitate to let it out, but here we are...Julie E. Bloemeke

Wrapped against winter,
your grandmother’s made quilts
heavy over us, the dreams
come like no other.

You wake me slowly, soft kiss,
and I roll into your firm embrace
sigh at the wonder, your limbs,
your bones, your beating heart, your
there. Eyes closed, I mumble the dream
through smiling: I was dancing

I was running, arms outstretched,
field and sky farther than my eyes.
There was everyone, and calico,
and women whispering
as they slipped covered dishes
under bedpillows to keep them warm.

The clouds came, dark, swirling,
and rain, but nothing stopped. Still
I ran, arms as wings. You were
laughing, stretched in the grass, smiling
a smile that 15 years together I
had never seen. I was joy for you, one
flash of sad, of feeling as
if I could not know.

I flew on, flew and wished
my legs younger, strong again,
that it did not ache to run them.
Behind the barn, sun now, I fell
into hay, said, remember, to myself
remember this joy without gates
this place not able to be crafted into words

where joy is joy and the brokenness
of everyday was gone. Remember this
gold, this boundaryless sky, that you flew
until you dropped.

Someone was coming—who?--
such peace my heart
and the sun so bright
I cannot see which face---

and I wake, back to this heavy earth,
where we have to work to dance,
where fetters keep us because
we make them, where we squint through
the cobwebs at the light and wonder
if it is possible. But I wake,

wake to your arms, your warmth,
you listening to my ancient voice,
dry but whirling,
and you touch me and hear:
joy, joy, joy, such joy

and when I do open my eyes,
I am facing the window, leaves
golden with autumn, birds

perched on a branch, bare,
full of song.

Published in the first issue of LIMP WRIST:

I.
I'm irritated by those people who
overuse the word Christian when using
it to describe themselves—
the same ones who spell Jesus H-A-T-E.

II.
Home from church she's on the phone;
quickly, she moves from praying
for others to talking about them.
Her phone’s hot like a whore’s
bed on half off day.
I wonder which uses her mouth more,
which one sins more, my aunt or a whore.

III.
He's gay; she’s better than that.
Her sin smells sweeter than his.
The Christmas card she mailed was
addressed only to her nephew
leaving of the name of his boyfriend
of six years. The Christmas card he sent
back left off his uncle’s name.
She didn’t get his statement;
she prayed over that card.

IV.
She's on the phone talking
about her Christmas card ordeal.
Not once does she use the words
gay or, heaven forbid, boyfriend.
That's why she takes so long
to tell her pain, her strife, her story.
She's doing the tango around the issue
even though no one taught her the tango—
it's a sin to dance that close.

V.
Gay.
Boyfriend.
If she can't handle those words
she’d shit a brick if she had to say
the name of the shot I drank last weekend.
Cowboy cocksucker,
say it auntie.

VI.
She'll pray for him tonight
and for me I'm sure;
she knows my truth but makes
it her own shameful secret,
makes a martyr of herself this way,
But I hate to tell her the world already knows,
and the sign on the martyr office
reads try again later.
I know she prays to a God
who has favorites,
loves some more than others,
He's definitely not the God I
learned about as a child.
While she's on her knees
praying to him I want to smile,
walk away, and say—
Kiss this.

This is from my recent collection, My Paris Year. Reading though it, I'm put in mind of the idea that Southern things/places/ideas/culture is never far from my mind...even in Paris!

On Finding Southern Poetry in Paris

Since my friend is so much taller,
I focus on the lower shelves,
the poetry section just a cramped corner,
a surprise since Shakespeare & Co.
is renowned for its writers, so many
of them poets. I had expected more
than the customary single column.

As always, I look for Southern poetry.
In the M’s I scan for Maddox, Everette,
hope to find his rare Songbook.
Instead, I discover a thin volume from Miller
a bit apropos when I remember that Paris
is also a city in Texas, and devoutly Catholic
Vassar would have probably liked the view
of Notre Dame framed by Modernist books
stacked either side of the shop entrance.

For 3 Euro, I get the famous
ex libris inside the faded front cover.
By a fountain, I wait for friends to make
final purchases before dinner,
scratch a quick note home
to say, despite French penchants,
“I’m still right with my raising.”
I know that months later,
if I can sleep deeply enough,
my dreams will bring me back here.

Thanks for hosting these, Dustin - looking fw'd to Agave, and seeing who gets le worm!

On the Occasion of Dinner
with Friends at the Colonnade


Margaret Cho says she wants her last meal
to be fried chicken with macaroni and cheese,
which means she would like eating here
where I sometimes sat with my mother
hearing, once again, her tales of picking cotton
in Elbert County, the long bag down scratchy rows,
Aunt Jeanette, a little ”tight,” adding details
while my sister and I groaned, eye-rolled.

Today though, I’m with equals, buzzed peers,
and sure we’re loud, the words, oral sex,
escaping our table, turning the head of a teen girl
who is prisoner at her own family table,
a teen girl who tries to make sense of us,
sizing us up as possible escape vehicle.
But we’re not. We’re gossips, unknowables,
and I’m having one of my aunt’s Bloody Marys,
toasting hardscrabble women who loved this room
where someone would feed them, call them, Hon.