Why Do I Write ~ Mark Wunderlich

WHY DO I WRITE ~ Mark Wunderlich 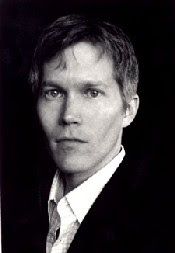 I learned to read when I was four and soon discovered the set of books on a small shelf in my room; I would spend much time reading and re-reading these books over the next dozen years. The set had once belonged to my father and had been published in the 1930’s. There were 14 in total—My Book House—edited by Olive Beaupré Miller. Beaupré. Beaupré! This name confounded me, irritated like a pebble in my shoe. That choking gobbet of vowels! That accent like a bee’s stinger! How was I to know how to say this name? No one I knew could tell me, and so it remained a mystery, foreign and untranslatable, as far away as France. Someone was able to tell me this name was probably French, and so I came to think of France as the place books came from. At some point, I was given or I found a Canadian nickel. Here too was writing in French! I began sorting through my parents’ change purses, looking for Canadian money. The quarters and nickels were uncommonly beautiful; what kind of a genius puts a beaver or a caribou on one side, and the profile of a queen on the other? More importantly, this money, like the books, suggested a world to me that lay beyond the rural corner of Wisconsin hemmed by bluffs on either side; you could see up the river to the first bend, and down the river to the wooded slough, but no further. This money which was familiar and yet altogether different, had made its way to my small town; it was useless there, but it had arrived nonetheless. The fables, poems and stories in My Book House were equally out of place with their allusions to Greek mythology and Shakespeare, though both the books and the money were useful, somewhere, to someone.

I was recently called “emotionally retarded” by an intimate. It was meant in jest, but it was meant nonetheless. Remarks like this have a way of working themselves into one’s psyche, clinging to your soft parts like a burr so I’m happy to have the chance to exorcise it here. This person is wrong, of course; I have, in fact, a full and nuanced emotional range, and those emotions find their best form in written language, in the poems I write. I was raised in a part of the world where expressiveness and emotional largesse are not valued, where displays of temper or strong opinion are considered shocking or just unspeakably rude. Much credence is given to humility, to simplicity of language. In people raised in this culture (I’m speaking of rural areas of the upper northern Midwest) this is sometimes expressed by a cool demeanor, or excessive politeness. It can also be seen as a general pleasantness, a sunny disposition—neither too hot nor too cold. Just nice.

While an adolescent, as I came to understand that my sexual attraction was oriented toward men, I saw that the world of seeming could differ sharply from the world of being. I learned to read subtle cues in tone and mood, learned to understand what was felt, but would remain unsaid. I searched the faces, gestures and voices of people I met, looking for evidence of likeness.

When I discovered poems and began to write them, it became clear to me that poems were objects but ones with a minimal physical form; that they gave pleasure but they also irritated (Beaupré! Beaupré!). The best poems suggested more than they said, and rewarded you for re-reading them. Some poems I knew could never be plumbed, were bottomless pools. The words made patterns and sounds and those sounds, though attached to the meaning of the words, created their own more mysterious meaning. Poems revealed and concealed simultaneously, and when my first book was published, my family and I both experienced a great deal of anxiety and distress about being exposed. I felt I had accomplished some great goal, and that the accomplishment came at great cost. My mother told only a few close friends about my book, and my father refused to either read it, or discuss the matter at all. I understand and respect their reactions, though I will continue to write and publish as it brings the world of seeming and the world of being closer together, and that work makes sense to me.

Several years ago while visiting my family in Wisconsin, I came across my collection of Canadian money which I had collected as a child. All told, I had about $50 in change and a few small bills. On a whim, I bagged it and put it in my suitcase. My partner and I made a trip to Montreal later that year, and I took along my money, changed it for bills at a bank, and spent it I don’t remember how—on a meal, or on the city bus, or maybe I left it as a tip for the bartender who listened patiently as I tried out my broken French.

Labels: Mark Wunderlich, Why Do I Write

This is lovely, Mark.

lovely post, Mark. I esepcially like the way you put this "I was raised in a part of the world where expressiveness and emotional largesse are not valued..."

It is also The Way where I was raised, and sometimes, I have to say, I miss it - the simplicity of it. True it is maddening to never speak intimately of ones feelings, but there's also such a thing as speaking to much. Perhaps this is why we chose poetry.

Mark: I am one of Olive Beaupre Miller's great granddaughters and have a few questions to ask you about her writing. If you would be willing to send me your email address, I'd appreciate it. Thanks. Jodi Read read.jodi@gmail.com